Coffee Plantation regions in India are characterized by heavy rainfall. However, the amount of rainfall received on any given day is unpredictable inspite of the advances made in weather forecasting. Productivity depends on two critical components, water and soil which vary from one zone to another. Improved soil water conservation inside the Plantation can also lead to greater fertilizer efficiency use.

Studies on the effect of erosion have shown that the downfall of many flourishing empires was primarily caused by soil degradation. If soil loss is greater, than soil development, due to accelerated soil erosion then the agriculture systems in the world will be seriously threatened. The survival of the coffee bush depends on the possibility of providing adequate soil moisture during the dry months. Thus the important question that comes to mind is finding out ways and means of maximizing the efficiency of soil water retention for greater productivity and sustainability. 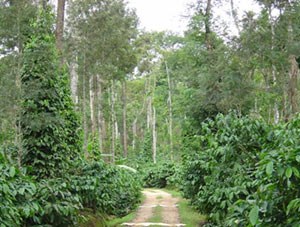 Soil profile plays an important part in the retention of surface water, subsurface water and ground water. Depending upon the physical forces at play and the mode of retention, soil water may be divided into three categories, namely HYGROSCOPIC WATER, CAPILLARY WATER, and GRAVITATIONAL WATER.

Hygroscopic water is that water which is bound to the soil clay particles and hence incapable of any movement. It is held so tenaciously by soil particles that plants cannot make use of it. The force with which it is held on the clay particle is reckoned to be 10000 atmospheres. However the osmotic pressure of the root sap of most plants is about 20 to 25 atmospheres and hence plant roots are unable to draw upon this water from the soil.

The downward movement of gravitational water through the soil is called PERCOLATION. A part of this water moves through cracks formed in the soil due to shrinkage, or through channels and cavities formed by organic matter decomposition. This water is called SEEPAGE WATER. Many a times due to the pervious nature of the soil, the gravitational water percolates down into the lower layers and drains away. If for some reason the soil layer is impervious, then the percolation water that collects over it is forms the GROUND WATER TABLE.

Looking back at the rainfall pattern in most coffee growing regions, the Monsoon is spread over a period of six months. However, July, August, September and October months are known for torrential rains where maximum soil erosion and runoff takes place. This transport of precious soil to river beds is catastrophic. Soil erosion is a destabilizing factor in all agro ecosystems. The amount of water that runs over the surface of the ground is considerable. Depending on the contour of the land, and ground cover the annual average loss varies from anywhere from 15 to 35 per cent of the total rainfall. This is commonly known as surface runoff. This surface runoff it is worth investigating, as it brings about a depletion of soil fertility. Do we realize as to where all this huge runoff water would finally lead to? 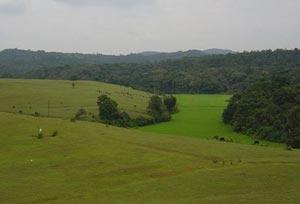 It’s more a rule in Indian Plantations where every block has cradle pits (3feetby 1feet by 6 inches width. These cradle pits are for young plantations and in older plantations the pits are larger in size, preferably called trenches varying anywhere between 24 feet long 1 1/2 feet wide and 2 feet deep. These pits are dug across the slopes and thereby in spite of any eventful downpour or cloud burst, all the soil and nutrients along with water is retained in these pits. Generally coffee is grown on red and lateritic soil and red sandy loam and within a short period, all the water inside these pits gets drained down to the lower regions of the soil, finally reaching ground water in the purified form, retaining precious soil and nutrients at the subsurface level which accumulates over the years and is recycled inside the Plantation.. The values of these water pits are two fold. Firstly they conserve water, but most importantly during the formation of these water pits the plantation ensures a host of benefits. 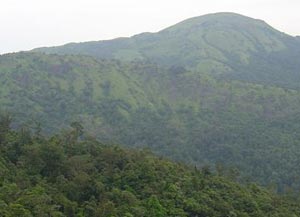 In addition to these trenches and pits, different cultivation practices such as scuffling and cover digging of soil just before the on set of the monsoons, helps in conserving soil moisture. Coffee forests with their dense mulch and organic matter act as blotting papers in absorbing rain into the fragile earth. They indirectly, purify more than 70 per cent of the water that we drink, from harmful bacteria. Even if there is a cloud burst inside the coffee plantation, one can hardly seen any runoff because of the blotting paper effect due to a mosaic of insitu activities within the coffee ecosystem. Due to the sponge effect the humus rich soils in one hectare of forest can store about 6 to 7 lakh tons of water after filtering. The top soil itself can hold 1.2 lakh tons of water. This speaks volumes about the importance of coffee forests not only as precursors in conserving water but also as vital links for the survival of Coffee plantations which in turn act as huge watersheds. 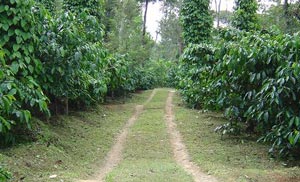 The crucial test to understand the health of the coffee plantations is to avoid cracking up of the soil, which leads to rise in temperature within the microhabitat and there by soil looses its power to sustain the Plantation. Soil microorganisms which give life to the soil are the first to be affected and then the macro organisms which work in tandem with the soil. A degree rise in soil temperature during the summer months due to inadequate levels of soil moisture will result in the death and destruction of millions of beneficial microorganisms. We have observed over the years that inspite of the thick mulch inside the Plantation , if the annual rainfall is much below average, then the soil starts cracking up and this can simply result in an immediate loss of soil vitality and will take years to bring it to proper health. Generally, the coffee Plantation comprises of a three tier shade system with the top most canopy anywhere between 100 to 150 feet. It is seen to be believed that when there is a heavy downpour the kinetic and potential energy of water can play havoc inside sensitive areas where ground cover is bare minimum. The first event that unfolds is the hammering of the rain drop from a great height directly into the ground and as the continuous pounding of rain drop into the same area, the soil quickly looses its binding strength and slowly is broken down into smaller and smaller particles resulting in the formation of sand. This sandy loam soil does cause enormous harm to the sustaining capacity of the ecologically sensitive and biologically active coffee farm.

Equally, important is soil water conservation in relation to runoff and erosion. Soil erosion is almost universal. After all soil is a finite resource. There is a conscious need to efficiently manage and conserve earth’s water resources in a manner that will allow maximum productivity on a sustainable basis. Far from the truth, inspite of advances in modern agriculture, improper soil management and lack of conservation practices have resulted in loss of precious top soil. It is an established fact that soil water conservation and soil erosion are two faces of the same coin. The second most important fact is that major causes for soil erosion is due to unplanned farming activities. 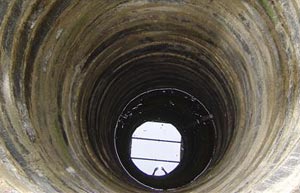 According to CENTRAL SOIL & WATER CONSERVATION RESEARCH TRAINING INSTITUTE, Dehradun 5334 million tons of soil is being eroded annually. Of this 29% is being permanently lost to sea, 10% is deposited in reservoirs as silt, 61% displaced from one location to another. This study warns that present annual acreage loss of top soil is approximately 16 tons per hectare; far above the permissible limit of 4 tons per hectare. Future generation of FARMERS is bound to be affected by this huge loss.

There is good news round the bend for all coffee farmers. Firstly, due to good soil management and cultural practices inside the farm, the accumulation of humus and mulch accelerates and this in turn keeps the soil temperature at an optimum level for enhanced biological activity. We have excavated six big water tanks inside KIREHULLY ESTATE with an average depth of 18 feet. Our observation points to an amazing discovery that within the Plantation zone , hidden underneath the subsurface of the soil are special rocks which grow in a very systematic fashion , either vertically downwards or simply in a horizontal manner and these rocks ; identified as WATER HARVESTING ROCKS. The nature of these rocks is that they are striated, pink in appearance and when one holds them to the cheek; it is as if a wet towel is held. There is irrefutable evidence that whenever a pond is dug, if one comes across these rocks, then the success rate of getting water is very very high. The beauty of these natural water harvesters is that they keep the biological clock clicking in an orderly fashion by providing sufficient moisture at different depths for trees, insects and microbes. They also provide the much needed aeration at the root zone.

Most Planters have not realized that the RHIZOSPHERE REGION (ROOT ZONE) of coffee plants, constitute one of the best moisture reservoirs inside the plantation. Water that infiltrates into this reservoir can be stored with relatively little loss for very long periods because the evaporation losses are bare minimum.

Soil water conservation is the key to productivity in coffee plantations. It basically denotes availability of moisture at the root zone and its surrounding areas and in turn stimulates a host of benefits to the entire ecology of the region. In more than two ways, Planters can conserve precious soil water. Firstly, Robusta plants are self shading and Arabica plants are spaced close to each other and this canopy literally covers the entire surface soil, thereby avoiding direct sunlight from reaching the ground. Secondly, the plantation is covered with a thick mulch of weeds and organic matter which does not allow the loss of moisture from within. 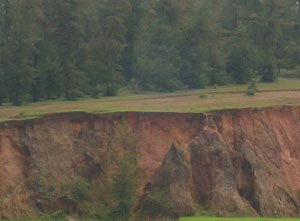 In recent years the amount of rainfall has declined, so also the infiltration of water into the soil, because of many MAN MADE factors like deforestation, compaction of soil and loss of wildlife habitats which are important links in the adsorbtion of soil water. World wide new coffee plantations are emerging (BRAZIL, CHINA, VIETNAM, INDIA, COSTA RICA, IVORY COAST, COLOMBIA) in areas which were not originally suited for plantations. These areas which cover thousands of hectares are converted into plantations either by slash and burn practices or by bringing in bulldozers and clearing up of large land tracts. These ill planned or destructive farm practices can significantly accelerate runoff of top soil and create deserts in the coming years. The maximum damage is done in new areas because of poor soil cover and exposure of soil to vagaries of nature. In the present day circumstances where water is limiting factor Soil water conservation should be a key area which requires undivided attention from all quarters. Rebuilding soil is a tough task and conserving water in soil is a even more tougher task.

This is surely a wake up call for all coffee farmers to do their utmost in conserving precious water and topsoil by following scientific methodology such that their farms remain sustainable, free from pests and diseases and most importantly having the satisfaction that future generations will be benefited.