Zinc is a necessary micronutrient for the metabolic activities of coffee and associated multi-crops. More importantly, zinc is required by microbes to carry out many essential physiological activities. Zinc added as a micronutrient often gets fixed in the soil and is unavailable to the plant. Plants can uptake zinc as a divalent cation but only […]

Zinc is required in small but critical amounts, especially in plantation cops. Among the micronutrients, Zn is the most limiting nutrient associated with Plantation crops. However, the role of zinc is much debated in coffee Agroforestry, despite scientific evidence that clearly points out to the fact that zinc plays a vital role in plant metabolism […]

Indian Coffee is associated with the Agroforestry method of cultivating coffee along with multiple crops. Mechanization is to a bare minimum and when one visits the plantation one can see trees haphazardly arranged. The soil is virgin and no serious effort is made to mechanize the plantation for the sole purpose of retaining the sustainable […] 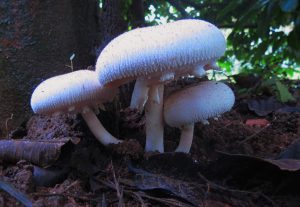 The bio-diverse Western Ghats forests, home to eco-friendly shade coffee are a treasure trove of mushroom biodiversity. Our research for the past three decades has clearly indicated that only a select few wild mushrooms have been identified and hordes of new species are yet to be discovered and classified. Shade-grown eco-friendly coffee plantations is known […]

Potassium is the third most important essential Major plant nutrient required by coffee and multiple crops associated with coffee. Potassium (K) is an essential macro-nutrient and also plays a vital role in plant growth and metabolism. The soil K reserves are generally large, but a considerable proportion of it is available in the form of […]

Coffee Planters in India may be in for a rude shock after reading this article. But the focus should remain strong. And that is protecting, nurturing, and multiplying indigenous microflora that is unique to each plantation. The keyword here is indigenous, meaning originating or occurring naturally in a particular place. We are trying to highlight […]