You are here: Home / Soils / Soil Organic Carbon and Its Importance in Shade Coffee

Shade-grown eco-friendly Indian coffee and carbon mitigation are intricately linked to the well-being of coffee Plantations. Soil carbon sequestration is a process in which CO2 is removed from the atmosphere and stored in the soil carbon pool. This process is primarily mediated by plants through photosynthesis, with carbon stored in the form of Soil organic carbon.

The entire process is better understood when one looks at the soil carbon inside coffee forests. In fact the carbon content of soil is one of the key indicators of the health of the coffee ecosystem. A vast majority of coffee Planters are well aware that an optimum amount of soil carbon is a key attribute of soil productivity.

Organic matter makes up just 2–10% of most soil’s mass and has an important role in the physical, chemical and biological function of agricultural soils.

Why Soil Carbon is gaining importance

It is a well-established fact that Soil organic carbon is a result of complex interactions of several ecosystem processes like photosynthesis, respiration, and decomposition.

The fact of the matter is that the earth’s soils contain about 2,500 gigatons of carbon—that’s more than three times the amount of carbon in the atmosphere and four times the amount stored in all living plants and animals. The carbon stored in soils is far greater than all the carbon in the earth’s biomass and atmosphere combined. Hence, there is now a large and growing interest in knowing the size of soil carbon pool and its sequestration potential. 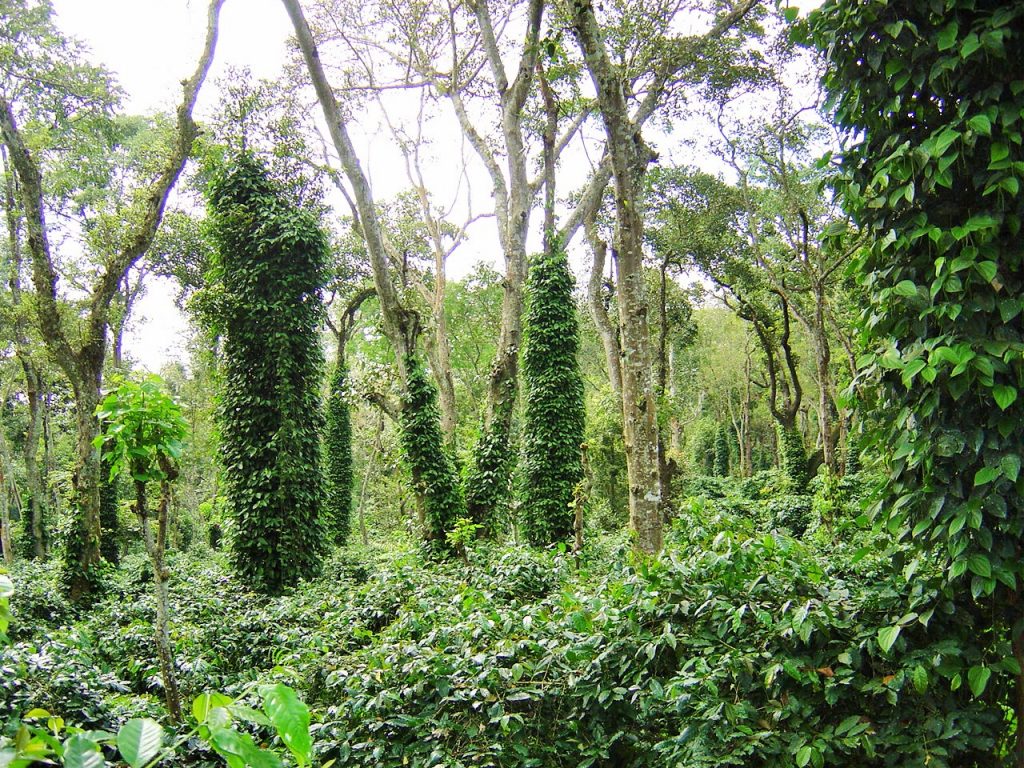 Why Coffee Ecosystems have an advantage of high Carbon sequestration.

The Bababudangiris, located in Karnataka, the birthplace of Indian Coffee, together with Coorg and Chikmagalur Districts where coffee is widely cultivated and the Nilgiris, located in Tamil Nadu, where coffee is extensively grown has a dense canopy of evergreen forest trees. Agroforestry with the evergreen trees involves multi-storeyed crops like pepper, orange, oil palm, and avocado, grown along with coffee. As such, at any given point of time, the soil system is covered above ground with a three-tier canopy of shade with annual and perennial crops, and down below, the ground is covered with an extensive root mat and a thick layer of mulch. Since Coffee is cultivated in the tropics, due to warm temperatures and abundant rainfall, high rates of both primary productivity and decomposition results in high soil organic carbon levels.

Soil carbon plays an important role in the stability and fertility of soils.

Soils rich in carbon, arrest the leaching, of precious nutrients.

Soils are an important sink for carbon globally.

Increase in microbial biomass and activity of the soil.

The higher soil organic matter levels found in the organic systems cause the soil to retain more water that results in better crop yields during droughts.

Soil carbon sequestration is one possible way of reducing greenhouse gas emissions in the atmosphere. However, to evaluate the real benefits offered by these methods, large-scale estimations of the carbon stock in the soils are necessary. Soil carbon sequestration potential in Coffee Plantations is difficult to estimate because of sparse data availability. We believe that Coffee Agroforestry has the potential to sequester significant amounts of carbon and earn revenue in terms of carbon credits.

What is soil organic carbon?

How should we manage our soils to increase soil carbon?