The Coffee Forests are gifted with various bird species both resident and migratory. This article throws light on the migratory Eurasian Spoonbill which visits Shade grown ecofriendly coffee Plantations during the winter months, preferably December to January.

This brief article on spoonbills, also provides a glimpse of the bird that breeds in Karnataka State and other parts of India. The pictures will help one learn to identify the birds both by their flight silhouette as well as the type of beak. Spoonbills are large wading birds characterized by their extremely flattened bills that are widened in the distal parts. All have large flat spatulate bills. 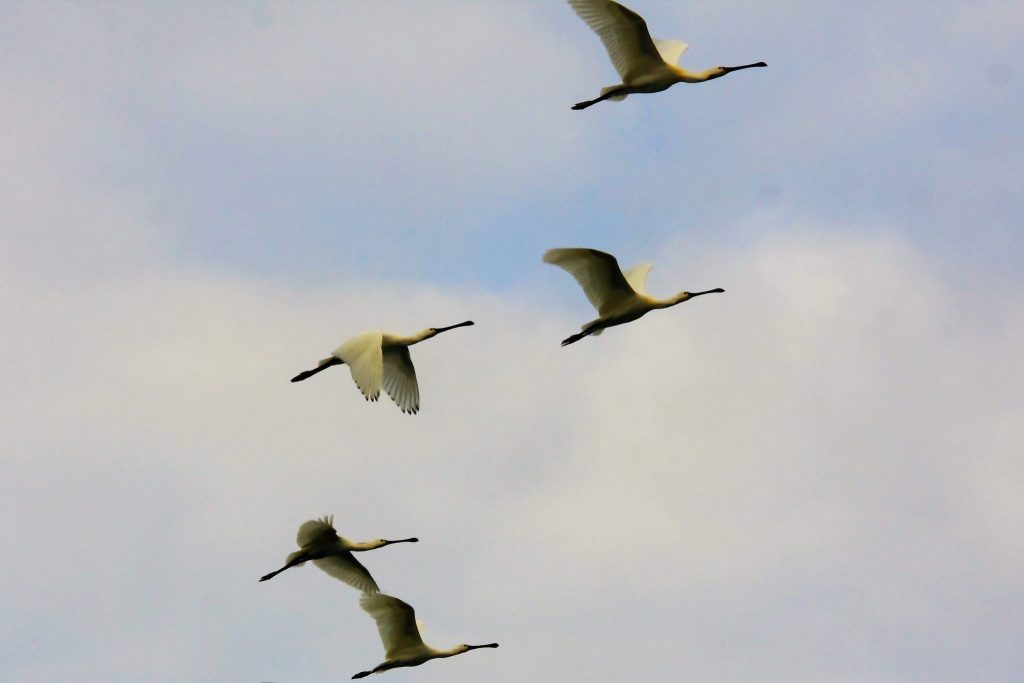 This is the most widespread species across Europe and is also commonly referred to as the common spoonbill. The distinctively spatulate bill is a clear identification. Both the male and female are similar in overall appearance but the male is somewhat larger than the female, with longer bill and longer legs. Juveniles resemble the non-breeding adults, but have pinkish bills and black tips to the wing feathers.

The spoonbill bill is rather unusual. It is highly specialized. It has a long spoon shaped bill; wide and flattened at the tip which enables it to dabble in mud or water like a duck.

In all there are six species of spoonbills and are distributed over much of the world. The six species are very similar in shape and behavior, mainly differing in size, color of legs, bills and other bare parts, and in distribution.

The Breeding range extends from Europe to northwest Africa, the Red sea, India and China. Wintering areas include many parts of Europe and Asia including many parts of Karnataka State. 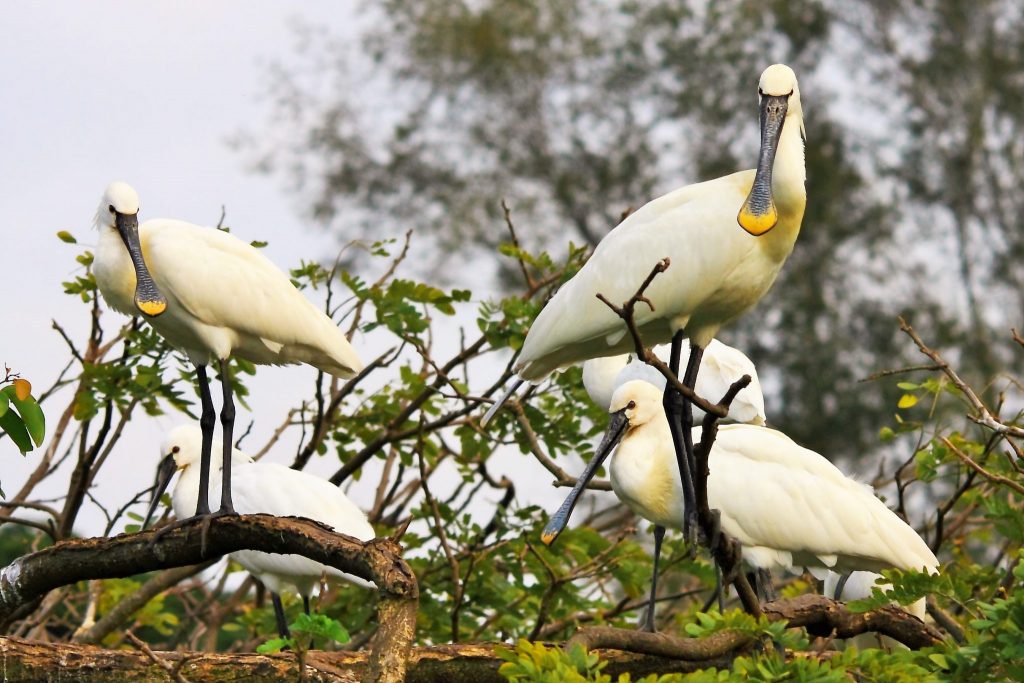 Spoonbills are monogamous. Generally breed in colonies, along with other species. During the breeding season, adults develop a crest of pointed and drooping plumes, as well as patches of yellow on the upper breast and the tip of the bill. The nest is made up of reeds or twigs. Both parents take up the responsibility of building the nest. The same nest is used by the pair for a number of years. The female lays the eggs in May or June. A clutch consists of three to five eggs, smooth and oval and covered with spots that disappear during incubation. Both partners incubate for 24 to 25 days and both tend the young. Chicks hatch one at a time and not at the same time.

The young birds leave the nest when they are six to eight weeks old. The newly hatched young are blind and need parental care. The bills of the young birds are short and straight and get the spoonbill shape as they mature. The primary reason for brood failure appears not to be predation but starvation.

Lakes, ponds, river deltas, canals, marshes with overgrown shrubbery. Although spoonbills commonly prefer fresh water but are found in both environments; Salt and fresh. Migratory Spoonbills congregate seasonally in large numbers at the same sites year after year. Hence, these sites are critical to their conservation and need to be protected from human destruction in terms of wetland draining.

The spoon bill flies fairly rapidly, with neck stretched straight out in front, now and then gliding through the air on motionless wings. In flight the neck and legs are out-stretched but held below the level of the body.

The species is threatened by loss of wetland habitat. Over fishing and erection of dams in sensitive breeding sites has resulted in population decline. 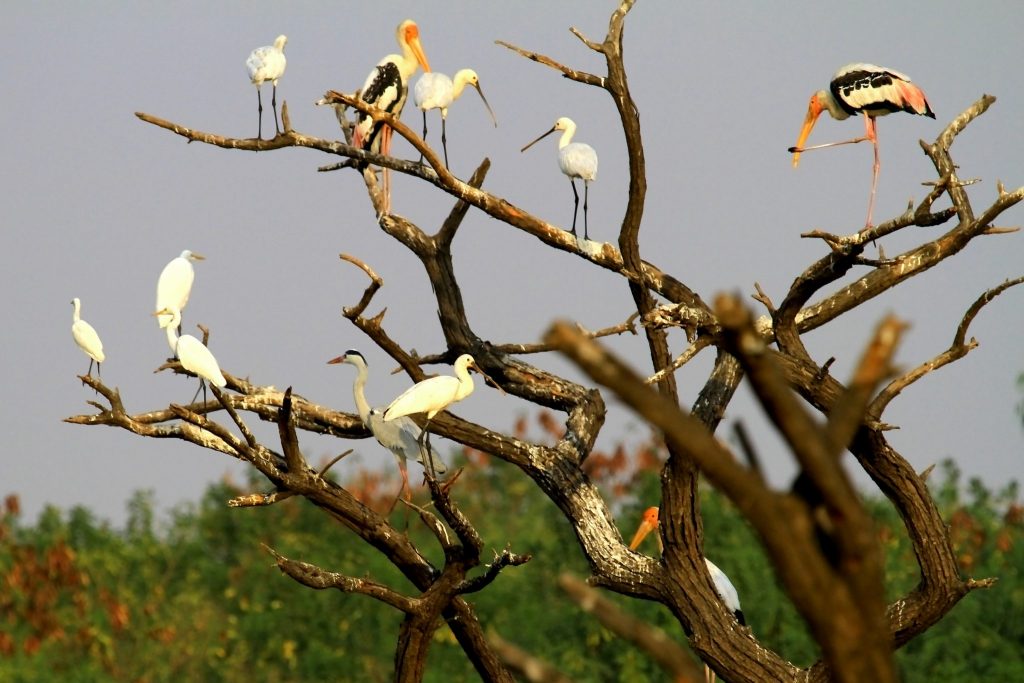 Due to the influx of a large number of migratory birds during the winter months, the spoonbills do not find adequate feeding grounds. Hence they prefer to share the same feeding grounds with Ibises, Herons, Egrets and other storks.

We do hope every nature lover will take a keen interest in learning about birds and inculcate ways and means of protecting them. Our idea to post photographs with an appropriate write up ; is to promote, educate and inspire the young to have a greater interest in the Planet’s living riches. A few pictures will act as a reminder on the wonders of our Natural world. 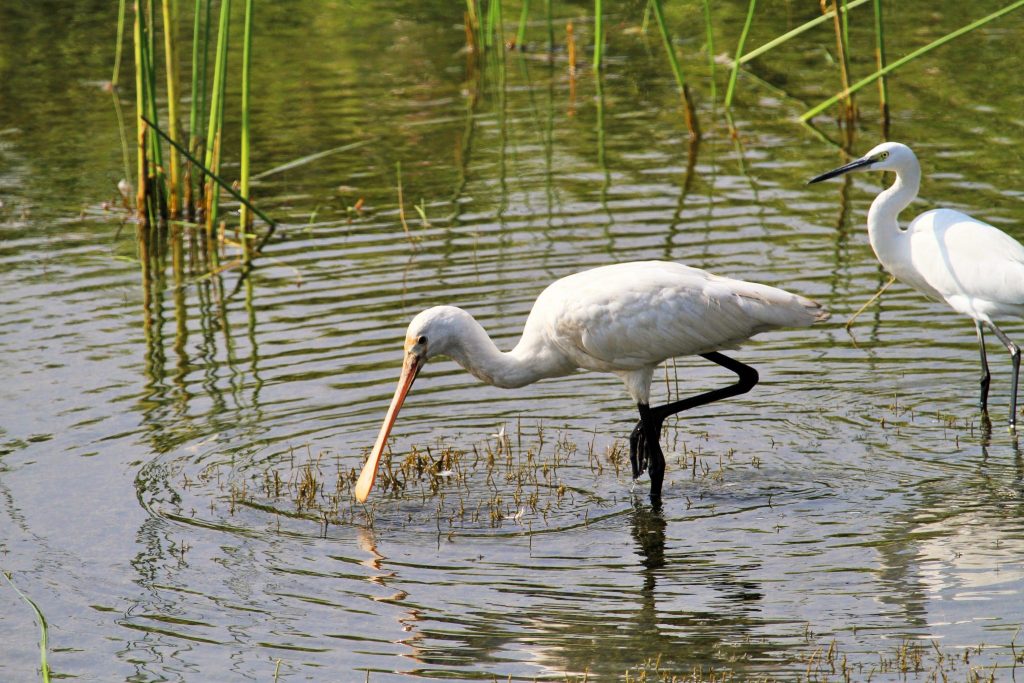 Conservation of intact ecosystems will greatly enhance the survival of the Eurasian spoonbill. Conservation issues should be addressed not only by the scientific world, but should be supported by individual households and corporates.