The amazing fact about Indian Coffee Plantations is that they are steeped in a tradition of growing coffee under shade by a variety of trees. The coffee plants are surrounded by awesome tree canopy. Hundreds of species of herbs, shrubs, spices ands rare animals share the same habitat. The energy flows; in such a complex system, have distinctive characteristics and needs to be carefully monitored and tailored to suit the requirement of the farm. 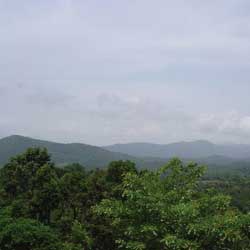 The coffee habitat consists of several diverse groups of microorganisms in varying proportions. Their energy requirements varies from species to species. Some are efficient in obtaining their nutrients and others are fastidious in their energy requirements. The coffee bush in turn exerts tremendous influence on the soil micro flora. Since coffee soils have varied organic residues they selectively influence Microbial Communities (M.C.) Microbial Communities carry out a number of functions vital to the prosperity of the coffee mountain.

We have taken great care to simplify the complexities involved in dealing with microbial communities so that it benefits the coffee farmer in adopting a SUSTAINABLE strategy for the future development of their coffee farms. A thorough understanding of this article will be of great help in predicting the effect of Microbial Communities on the coffee ecosphere including the biodiversity of the region. 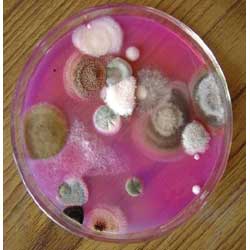 The very fact that microorganisms are abundantly found inside the coffee mountain suggests an exciting possibility. For some scientists believe that hydrocarbons are a better solvent for life nourishing microbial communities. Microorganisms are not only found below the soil interface but are also found in the air. Because of their low weight they can be transported by air currents to long distances. 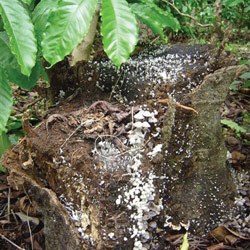 Since coffee is grown on an elevation ranging from 750 feet to 5500 feet main sea level the coffee mountain is exposed to different weather patterns ranging from dry spells to very wet monsoons. The boundary between water and air changes dramatically in the rainy season. In winter for 2 months there is hardly any sign of life but like ants and termite colonies, microbes work day in and day out creating new communities. Our inferences point out to the fact that the path they choose is far from random. 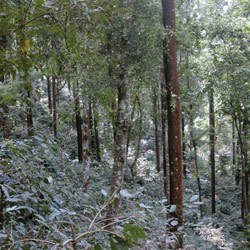 Equally important is the availability of leaf biomass which again is seasonal and dependent on the type of tree species. Some tree species shed their leaves in summer and others during the onset of monsoon, but they do so in a synchronized manner such that the level of biomass required for the activity of microbial communities is always there.

However, if this delicate balance is changed by undesirable man made activities then it is bound to alter the microbial equilibrium in soil at least temporarily. Hence,most of the times the visible and invisible biological inhabitants have to cope with a diverse set of unpredictable conditions either favorable or stressful. Ultimately, each coffee mountain harbors a unique set of micro flora perfectly designed for a harmonious relationship with coffee and its surroundings. Some microbial communities exhibit yearly rhythms. Some exhibit seasonal succession depending on the availability of substrates. 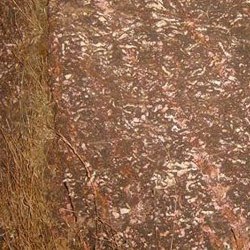 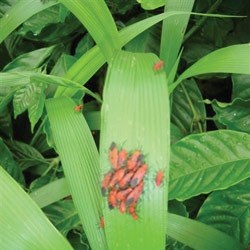 Is the science which studies the interactions and interrelations among and between microorganisms and their environment. It Deals with the behavior of organisms in their natural habitats and with the relations between different organisms. The basic unit in ecology is the ecosystem. The ecosystem consists of Abiotic and Biotic components. The most influential of all biotic components is the Microbial Community. This in turn deals with the population of microorganisms.

Place or locality with particular kind of environment inhabited by communities.

Cluster of micro aggregates with associated water within which microbes function.

Relates to the functioning of a species or population of microorganisms within the community. ie.Functional role of a given organism within its habitat. 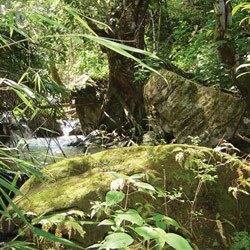 An ecological community forming a self regulatory unit.

Microorganisms encased in an adhesive, usually a polysaccharide and attached to a surface. Various microbial populations within biofilms form a complex symbiotic bond paving the way for the exchange of nutrients and protection. 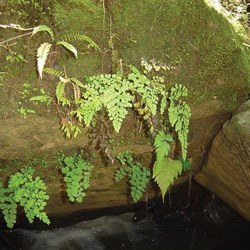 Immediate physical and chemical surroundings of a microorganism.

The movement of nutrients from one life form to another as a result of the different feeding habits and dietary requirements of organisms in an ecosystem.

Consists of two or more species of organism living in the same habitat.

Events Unfolding Inside the Coffee Forest 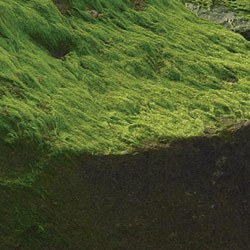 The Pioneer Organisms are the very first to colonize the coffee forest. Microbial communities pass through various stages of evolution. This process is called succession. It all starts with Primary Succession: Colonization of a habitat by microbial populations not previously colonized. Then starts the Secondary Succession; Colonization after the Primary succession.

Based on the season, prevailing climatic conditions, type of leaf litter and biomass; the floor of the coffee mountain shapes the formation of microbial communities. This key builds up of biomass results in a rich variety of microbial life. Hundreds of elements essential to life move back and forth between microbial communities and its surroundings. It is amazing to know that billions of microorganisms live in relative balance, each devising a unique strategy to propagate their species. At every stage of succession, one microbial community is replaced by another. The successive communities are each integrated units.

This is an ongoing process ultimately leading to a stable microbial community. These stable units are termed Climax communities. The coffee mountain facilitates rapid successional changes because of the varied biomass like Decomposing leaves and other rich humus and organic matter on the forest floor. At each step of succession the micro and macro environment too gets modified. 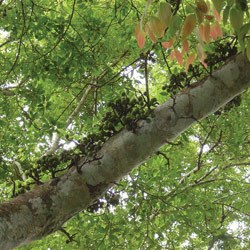 The highly complex coffee habitat undergoes constant variations from time to time which in turn decide the destiny of microbial communities. Variation is at its greatest during periods of increase and mortality. Variation provides the raw material for natural selection. In a shifting soil ecosystem the initial microorganisms which colonize the area, establish rapidly and ward off competitors.

At times there is a succession of populations, which is facilitated by the early habitants. The early inhabitants modify the habitat in a way that permits the new microbial communities to develop. In the real sense they exhibit tremendous adaptations to stabilize the microbial community. 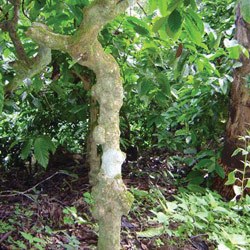 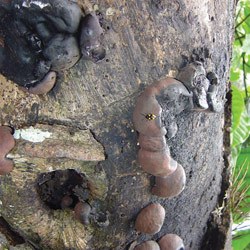 However, most microorganisms lay dormant for many years in the soil by producing heat resistant structures known as endospores. The spores germinate during favorable environmental conditions. This mechanism helps in the continuation of the species survival. Those which do not produce spores have the capacity to mutate. Mutations are of different types: Spontaneous mutations, Silent mutations, Back mutations and Individual mutations.

Generally speaking mutations are recessive at first but due to persisting circumstances may turn dominant. In rare instances crosses of genetic pools may take place between closely related species resulting in hybridization. In every likelihood they may confer beneficial characteristics on the organisms.

The lessons learned at Joe’s sustainable farm are invaluable in protecting the coffee mountain and all its wealth. The key lies in understanding the needs of microbial communities.

There is growing evidence from our research that: 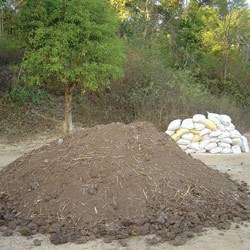 The activity of M.C. is conditioned by soil factors such as aeration and moisture. One among the several key factors in maintaining an equitable balance is the amount of aeration provided to coffee soils. Due to constant use of fertilizers and chemical poisons ; soil compaction takes place resulting in the formation of a hard pan, limiting the supply of oxygen to the primary and secondary roots. Secondly, Since Indian coffee plantations follow the high density of planting the number of plants in a given acre may range from 2000 to 1000.

Over the years the primary feeder roots forms a dense mat resulting in the hardness of the soil. These intertwining roots lock into the soil colloidal complex and limit the free exchange of gases with the surrounding environment. Aerobic microbial communities get inhibited. Also the top 4 inch layer of soil is the most important for the growth of coffee. The maximum concentration of microbial communities is concentrated in this zone and reduces with soil depth. However, this concentration of M.C. is directly correlated to the amount of organic matter content available. 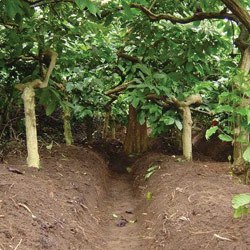 The above problems can be easily overcome by working with the soil in an environmentally friendly manner. To start with, the practice of scuffle digging every year followed by deep digging ( one foot ) once every three years is a must ,generally in the month of august and September. The harvested soil should be uniformly spread on the floor of the coffee forest. 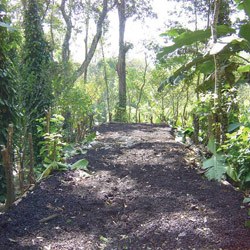 This deep digging improves the soil conditions which in turn aerates the soil, loosens the crust formation, activates the soil pores, supplies oxygen, and increases the vigor of the bush favoring the setting up of microbial communities. External addition of poultry manure/ sheep manure/ neemcake/ cattle dung every alternate year brings about soil transformations and acts as a precursor for the growth and multiplication of microbial communities. Organic amendments need to be incorporated into the soil for better results. 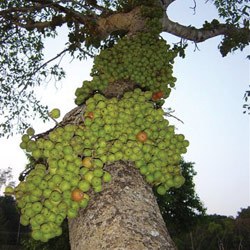 Our ancestors always planted fig bearing trees because they used to bear fruits twice a year. These fruits when ripe used to fall on the forest floor and the resultant decomposition enriches the soil. Also these trees were storehouses for large quantities of water there by keeping the surrounding habitat always moist even in summer. After all water (MOISTURE) is the home element of microorganisms. Microorganisms are gifted with special breathing apparatus to breathe in moist soils. They show tremendous adaptability in conserving energy.

Farmers also used to plant trees with repeated leaf shedding with the sole purpose of enriching the soil and balancing the carbon nitrogen ratio. Modern day farmers have introduced quick yielding timber varieties which mine the soil and do not contribute to the ecology, rather rob the soil of its nutrients. The leaves are filled with phenols and non biodegradable constituents, upsetting the balance of nature.

The coffee mountain is a mountain full of mystery. For millions of years animals, insects and microbes have been living side by side. The relationship between and among the various biotic partners has always remained mutually satisfying. The undisturbed coffee mountain provides a valuable base for the establishment of microbes. However, with the advent of mechanization, the coffee mountain is increasingly being disturbed.

At no other time in history has the coffee mountain been subjected to so much abuse. If remedial measures are not taken on a war footing the coffee sanctuary will not be able to support itself , but will also result in the loss of microbial communities. 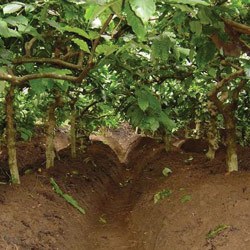 Man’s continued assault on the environment has resulted in unrestrained exploitation of natural resources. Over the years the coffee landscape has changed dramatically. Felling of forest trees and the application of very high doses of chemical fertilizers and pesticides inside coffee plantations is like a disease spreading with no cure at sight. Increasing evidence regarding rising deforestation and decreasing ground cover are clear warnings that Microbial Communities cannot sustain themselves. These undesirable activities remove large amounts of organic matter from the microbial nutrient cycles. This accelerates the death and destruction of microbial communities.

Globally, mankind is waging a war against nature. We need to quickly realize that the destiny of mankind is interlinked to the well beings of plants, animals and microbes. If we get it wrong, it would spell disaster . We need to change our life style to live sustainably. We cannot fight nature, but we can learn to predict nature. It is in these contexts that that we need to understand the role of microbial communities in building up stable relationships.