Coffee Forests in India partner many types of visible and invisible biological hosts that has a marked influence on the Coffee ecosystem. One such partner, namely, ant species are known to form a symbiotic relationship benefiting both coffee and the forest. Right from the seed stage to the fully grown coffee bush, ants are associated in one way or the other in influencing plant growth and development. In fact, if we look at the larger picture, a keen eye can help us learn in detail the intertwined lives of ants and trees and all other species associated with the coffee forest.

Ants are among the most abundant insects inside coffee forests. Scientific data reveals that the total ant population is estimated at one quadrillion (1,000,000,000,000,000). One insect out of a thousand is an ant! There are at least 12,000 identified ant species in the world. Scientists believe there are many more. They are an incredibly successful species, probably due to their complex social organization.

This paper is in response to various studies conducted in many parts of the world showing a mutualistic symbiosis between ants and coffee. 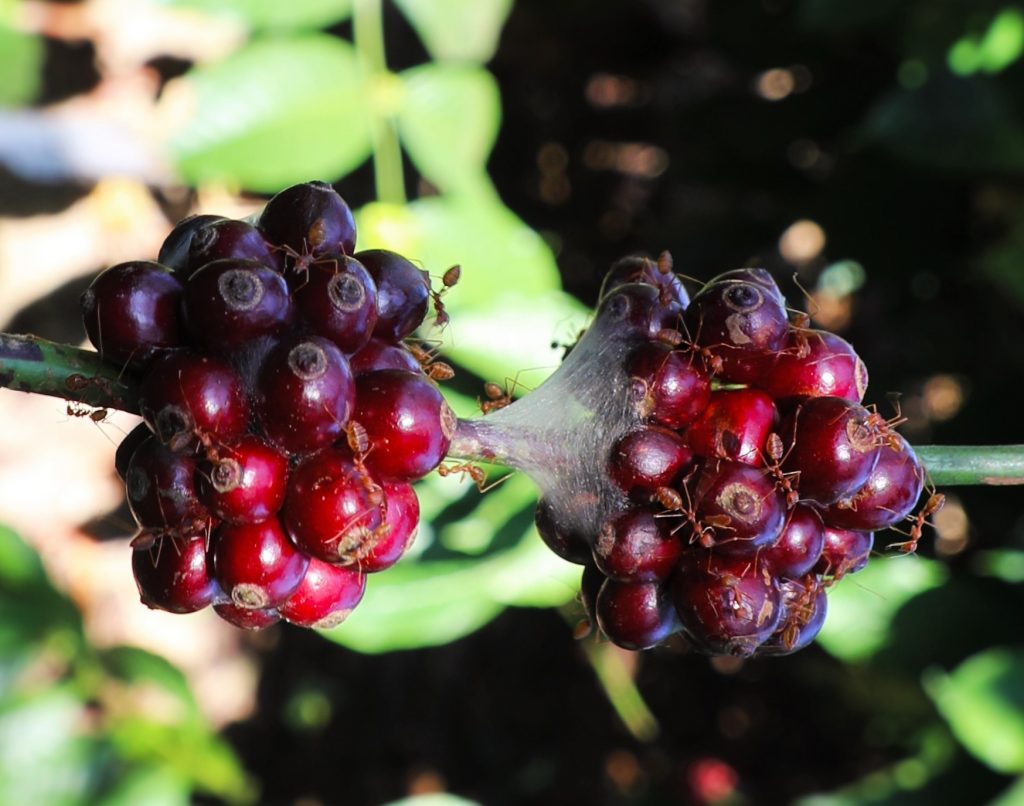 Coffee Planter’s in India literally stimulate a forest environment where coffee agroforestry thrives exceedingly well. Ecofriendly Indian Coffee forests include an overstory of shade trees both introduced species like erythrina and native tree species. Associated with high levels of biodiversity. Different Ant species are commonly found nesting in these trees. The exact role of each species is not clearly understood. Scientific research papers categorize some species of ants as pests, others as predators and a few species having a mutualistic interaction with coffee agroforestry. By understanding ant plant relationships, Planters will be able to quantify the enormous benefits coffee derives from playing host to ants in a mutually advantageous relationship.

Review of literature clearly states, Ant–plant mutualisms range from facultative interactions, where plants interact with multiple ant species, to obligate one-to-one interactions, which tend to be species specific (Heil & McKey, 2003). Scientists have reported that ant plant interactions leads to increased plant fitness.  In addition, soil-nesting ants increase the nutrient content of the soil around their nests to the benefit of nearby plant roots.

Ants have their strength in numbers. They build underground tunnels and in the process aerate the soil, allowing water and oxygen to reach plant roots.

Due to their activeness, ants keep moving from place to place in search of food and have a direct influence in food chains and food webs.

Ants act on seeds and other organic matter and in the process, enrich the soil.

Ants help in ecological succession because they feed on a variety of organic materials and break it down to smaller units which acts as food for other organisms.

Christian Pinkalski et al (2017) in their studies published in the journal of ecology, clearly spell out that Coffee Arabica had a positive interaction with ants. Their research findings showed that nitrogen ingested by ants was deposited as ant fecal droplets in canopies and subsequently was absorbed by coffee leaves and trans-located within the plants. They further add that discovering this mechanism in facultative ant plant interaction adds a hitherto unrecognized benefit to ant plants and may change our understanding of ant plant co evolution. 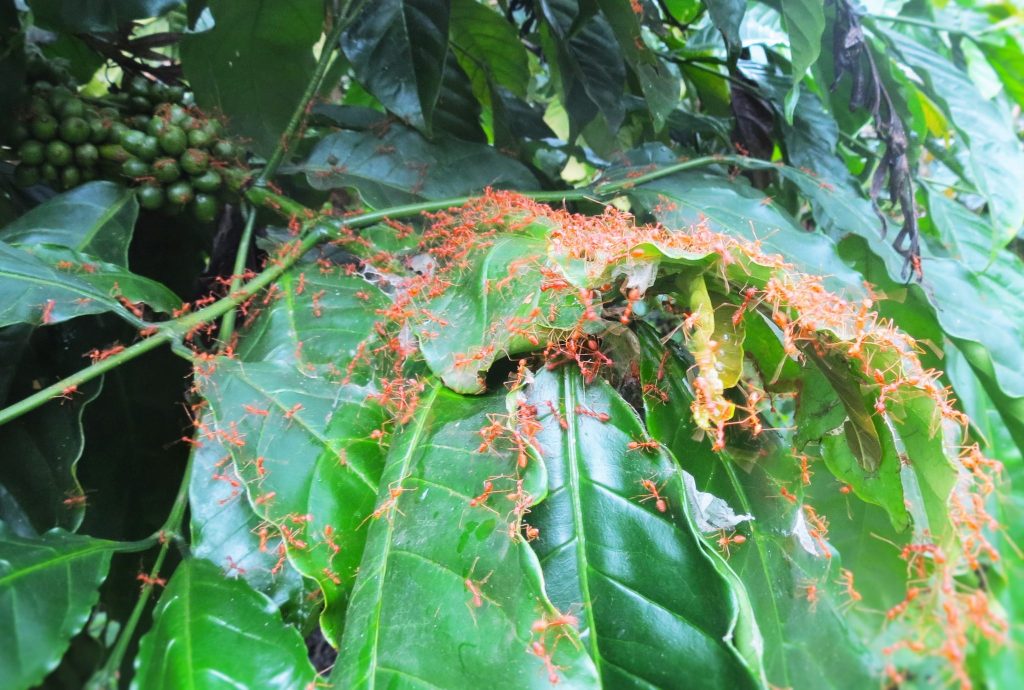 Several researchers report that worker ants deposit faecal droplets from rectal sac fluids and deposit them throughout their territory, especially on flushing leaves and developing fruits, where ant activity is highest. These faecal droplets contains nutritious compounds such as amino acids and urea, compounds that are commonly used as foliar fertilisers in agriculture, as they can be absorbed directly by plant leaves .

We have noticed many different ant species associated with coffee, multiple crops and trees inside coffee forests. However, we were unsure of the role played by ants in influencing the coffee bush. On the contrary, a vast majority of the coffee planters, including us were of the opinion that ants are destructive and cause immense damage to Coffee Agroforestry. Hence, the first step taken by Coffee Planters was to destroy both above ground and underground ant nests and get rid of ant colonies.

However, a chance reading of a few research papers highlighting the positive role of ants in coffee ecosystems, has helped us gain important knowledge on the role of ants and helped us widen our understanding of ant plant interactions and the mechanisms involved. The primary benefit which allows coffee to obtain nitrogen and to take up a lot of carbon dioxide for photosynthesis. 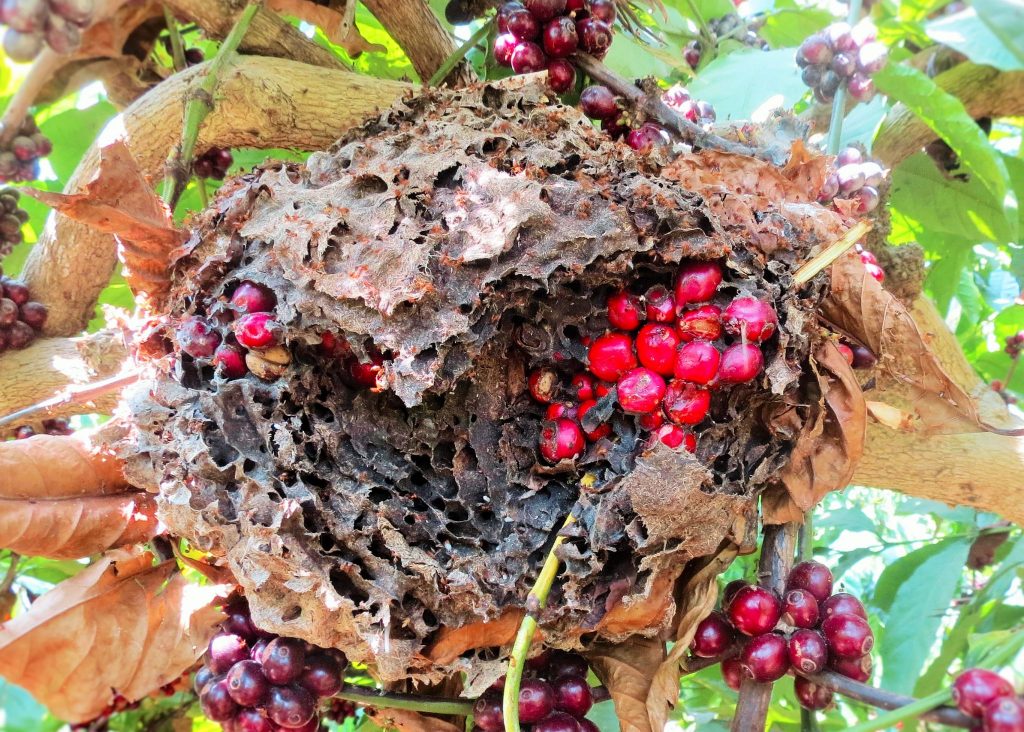 Ant nests, both above ground and below soil inside Indian Coffee forests, in the eyes of a vast majority of Coffee Planters was considered detrimental for plant growth and development. Ants were always considered as agents involved in the spread of diseases with the help of aphids. In a small way, this may be true but by thinking out of the box, we have now realized that we need to add many correction factors and help stabilize the coffee ecosystem by learning to appreciate the role of ants in food chains and food webs. In the long term, all coffee Planters will stand to gain by allowing ants to play their biological roles. Here and there Planter’s may lose a little in terms of productivity, but in the long term, they stand to gain when the ecological integrity of the coffee ecosystem is intact. These very tiny ants, will act as saviours in preventing pest and disease incidence.

Seasonal contrasts in the response of coffee ants

Ants of the North Quabbin Region

The ecological importance of ants

Plant Plays Host to Ants, and Reaps the Benefits