You are here: Home / General / Testing Coffee – Fermenting vs Demucilaging

Everything changes. People aren’t always happy with change but it happens whether we like it or not. It’s kind of a survival instinct to be afraid of change because change isn’t always safe. When something new comes along it might be good, it might be bad, we just don’t know for sure until we have a little time to get used to the change.

In the days before electricity, communicating with someone across town meant sending them a letter or going there yourself. Now we have email and cell phones. We also have spam and roaming charges. It’s not all good but most people have accepted the change. 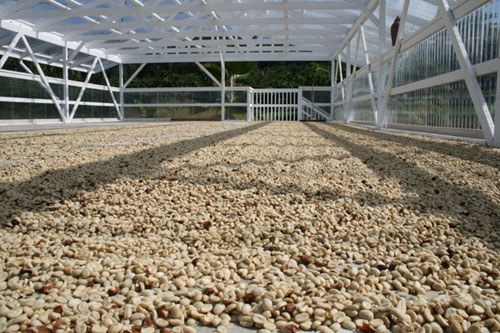 Coffee laying out on deck

Before freon was invented, refrigerators were expensive, toxic and sometimes explosive. Today we take refrigerators for granted. Things like AC and ice cream are readily available to almost everyone. Yet along with refrigeration also came CFCs and a hole in the ozone layer. Luckily we figured it out and changed the way refrigerators work. That’s good because I don’t know if I could have given up ice cream.

Electricity, automobiles, fast food, computer games… they’re all changes that I’m pretty happy to have, even if they’re not all good. Modern life is always changing and Kona coffee farming is no exception. Donkeys may seem quaint but my pickup truck is stronger and faster. Fixing my diesel tractor is a pain but not nearly as bad as shoveling huge piles of mulch by hand. Gasoline and electricity aren’t cheap but what would I do without an electric pulper, peel every bean by hand?

Once pulped, the traditional way to dry coffee is to simply lay it out in the sun. The problem with this is that every time it rains the coffee farmer has to run out and cover the coffee beans before they get wet. Thanks to the invention of clear plastic roofing, I don’t have to worry about a little rain ruining my coffee. I think that’s a good change.

Even with clear plastic roofing, sun drying can take weeks if it’s cloudy. At the height of the harvest season, drying deck fills up fast and most coffee mills use mechanical dryers to speed up the drying process. Compared to the long history of coffee farming, mechanical dryers are a fairly new change and not everyone likes them. There’s some controversy whether mechanical drying affects the quality of coffee compared to sun drying.

The controversy over fermenting versus demucilaging is an even bigger issue. After pulping, Kona coffee is traditionally put in a large vat of water and allowed to ferment. This breaks down the mucilage layer so the coffee can dry properly. A modern machine called a demucilager can do this without the need for fermenting. There are pros and cons of both methods with strong opinions on all sides of the topic. Demucilagers are a recent change and there is a lot of resistance.

A couple Kona coffee farmers I know recently decided to perform a test. They took a batch of coffee from a single farm and split it into four parts. Half was fermented while the other half was ran through a demucilager. Then both those halves were split again, half being sun dried and half being dried with a dehumidifier. The coffee was then roasted and prepared for a blind taste test.

Several people were invited to this taste test, including some of the more influential members of the Kona coffee community. The coffees were labeled red, green, blue and yellow. Nobody knew which coffee was which until after the cupping. The cupping was done as formally as possible to avoid any inconsistencies. Would you care to guess what the final results were? Did people choose one method over another? Did all the coffees taste the same or was there a noticeable difference?

The cupping was done twice, once with a lighter Cupping Roast and once with a darker Restaurant Roast. There was a very lively discussion about the different roasts and roasting methods in general. It was an interesting discussion but we weren’t there to discuss the roast, we were there to see if demucilagers and mechanical dryers make a difference. 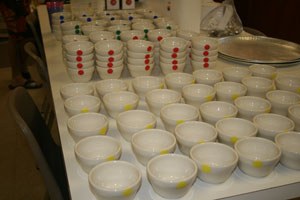 The taste test required more than 100 cups of water 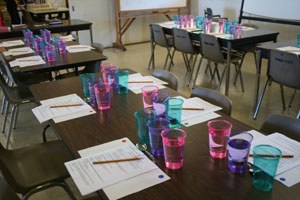 Each cupping station is ready for a blind taste test.

Some people said they could taste a difference but identifying a specific processing method was difficult. Right before the answers were revealed I asked one last time if anybody was willing to guess which coffee was which, nobody would. One person felt that if he worked at it he could maybe learn to tell the difference but the difference, if any, was subtle and there was no general consensus.

After it was revealed which coffee was which there was a little bit of “I knew that coffee didn’t taste right” but it was too late, the change of opinion simply shows how strongly people feel about the subject. It’s difficult to change peoples’ minds and running one test like this can’t give a conclusive answer. There are a lot of pros and cons involved and cupping is only one way to measure it. 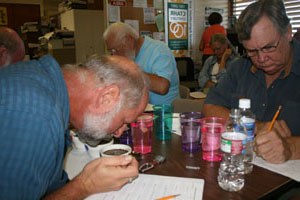 Regardless of the specific outcome, I think this taste test shows a much larger victory: Kona coffee farmers care. The event itself took several hours and the people that organized it spent several days getting ready. Collectively, there was a lot of coffee knowledge in the room and lots of good information was exchanged. We may never agree on the “best” way to grow and process Kona coffee but it’s good to know that we’re all working hard to do our best.

Personally, I have been fermenting and sun drying my coffee. It’s not because I think it’s better but because I don’t yet own a fancy demucilager or dryer. I did recently purchase a new pulper, complete with demucilager. In my opinion, not only will it save me a lot of time and money, it should also help me get a consistently cleaner coffee bean. I may some day get a mechanical dryer but for now the sun and my drying deck get the job done fine.

I’m not particularly resistant to change but I do like to proceed carefully. I’ve spent a lot of time researching various processing methods and once my demucilager arrives I’ll spend more time tuning and testing it. Some farmers use a demucilager then ferment the beans anyways. I’m not sure what I’ll do but before making any changes I’ll be sure to consider both the good and the bad. I prefer good.